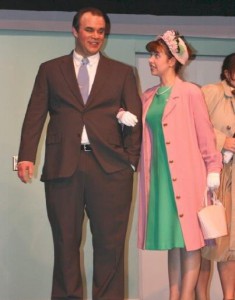 “Katie Lynch Koglin . . . is both a graceful dancer and a beautiful soprano. She deserves the name ‘goddess’ that Stone bestows upon her.” – Emily J. Meier, The Barnstable Patriot

“Sung in strong clear voice, Lynch’s perfect pitch and outstanding diction are especially important, because she is the backbone of this Biblical story . . . the show (is) held together by Lynch’s narration.” – Gwenn Friss, Cape Cod Times

“Of all the sisters, Meg (Katie Lynch Koglin) pursues the most traditional domestic lifestyle, and Koglin really does seem the perfect “little woman,” with appealing dollops of spunk and humor. ” – Cindy Nickerson, Cape Cod Times

“Katie Lynch Koglin, as talented as she is irresistibly attractive as Rosemary Pilkington, the cutie who sets her sights on Finch, couldn’t be better. There is real chemistry between this young married couple.” – Frank Gibson, The Register

Katie Lynch Koglin is simply a charmer as the sweethearted Rosemary. The perky actress is a nice counterbalance to her husband. The couple have built in chemistry.” – Johanna Crosby, Cape Cod Times

“You get to watch the formidable comic talent of Katie Lynch Koglin” – Ellen C. Chahey, The Barnstable Patriot

“You can see a bit of Carol Burnett in the way Ms. Koglin uses her voice, but mostly Ms. Koglin creates her own character here, vocalizes beautifully – whether she is singing the amusing and wistful “Happily Ever After,” the comical “Swamps of Home,” or belting out the raucous “Shy” – and clowns masterfully, especially as she tries, fitfully, to get to sleep on top of her bed of 20 mattresses. It’s easy to see, despite her awkward arrival (she swam the moat!) and general boisterousness, why the prince is smitten with her.” – Marilyn J. Rowland, The Barnstable Enterprise

“Katie Lynch Koglin is perfectly cast…The animated actress exudes a charming, impish quality. She’s armed with wonderful comic skills, a terrific singing voice and dancing ability to boot. Koglin delivers a delightful rendition of “Happily Ever After.” Her wiry maneuvers to get comfortable in the big bed and drift off to slumber land are hilarious.” – Johanna Crosby,Cape Cod Times 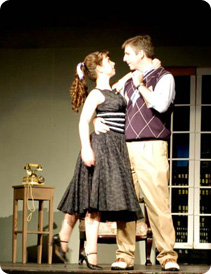 “Koglin is the perfect girl next door. She has one of those acting faces that would show what she’s feeling even if she didn’t say a word. It’s not only the cute dimples, it’s the way her face is in constant motion. She’s prettier, but reminds one of Monica Horan…on “Everybody Loves Raymond”.” – Gwenn Friss, Cape Cod Times

“Miss Wylie…(is) played by Lynch as a high-energy, beaming upstart . . . Her energy on stage is ebullient, animated and infectious.” – Bethany Gibbons, Barnstable Patriot

“Talented Katie Lynch portrays an enchanted teapot, aptly named, Mrs. Potts, as a lively lass, motherly toward her little teacup child, Chip, but sassy and headstrong, too. Lynch, who sings the signature song, “Beauty and the Beast,” maintains a beautifully textured and highly polished performance throughout the show.” – Carol McManus, The Cape Codder 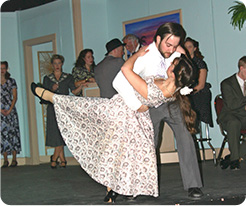 “As Marsland’s parents, Katie Lynch Koglin and Alexander Colacchio, really shine in their first dance together. This is the kind of couple for whom everyone clears the dance floor.” – Gwenn Friss, Cape Cod Times 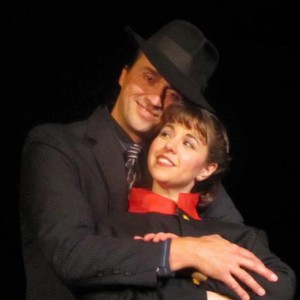 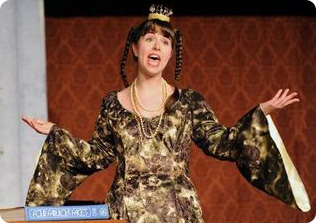